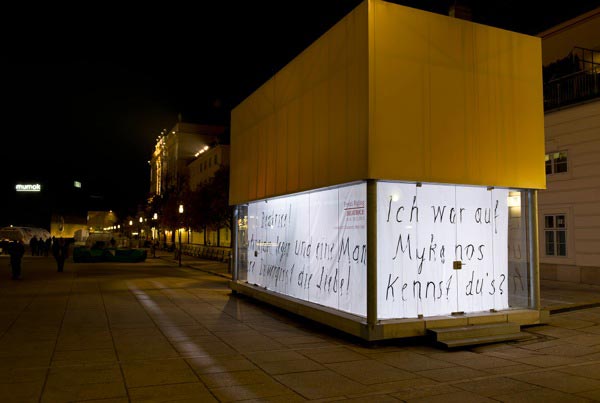 The starting point for the installation Beatrice by Frenzi Rigling is a film: La dentellière (The Lacemaker) by Claude Goretta, 1977. The film tells the story of the 18-year-old hairdresser’s assistant Beatrice, played by Isabelle Huppert, her love for the philosophy student Francois and the breakdown of their relationship. But it is not the narrative that Frenzi Rigling deals with in this work at the Art Box. The black lettering that is loosely sewn onto the white cloth does indeed spell out individual sentences that are uttered in the film, but the installation understands this film as a model of two fundamental poles of human life: language and feeling. Our culture is shaped by the interweaving of feeling and speaking and the resulting actions. Are the neuronal links between the feeling and language centres equally pronounced in women and men? In the direct vicinity of the MuseumsQuartier, a place where people meet, communicate and get to know each other, this topic is always controversial and current.

Back Overview Frenzi Rigling
We use cookies to ensure that we give you the best experience on our website. If you continue to use this site we will assume that you are happy with it.OkRead more